“Carter Burke and The Goonie: What You Better Not Be Missing on NETFLIX”


“Carter Burke and The Goonie: What You Better Not Be Missing on NETFLIX” 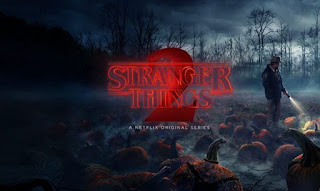 At times, this job of reviewing streaming media can be difficult.  Partly because I only get paid in “Likes” (which is why I always like my own stinkin’ reviews), but mostly because it involves watching enough films or shows to put together a list of things you should watch.  Based on my opinion, of course. 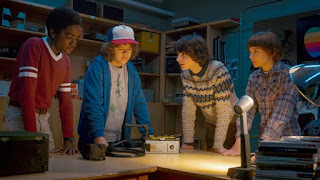 Last year, I was skeptical going into the first season of “Stranger Things”.  The premise seemed a bit worn, the references to the eighties too obvious, the acting questionable—and all that was just from the trailers.  But after ten minutes, I found myself hooked (and I obviously wasn’t the only one, as it did not take long for the programming geniuses at Netflix to option a second season).

That first season was a mind-blowingly original love letter to the Eighties.  It worked splendidly on 89% of the levels it was attempting to attain; that 11% was due a few minor issues, and my irritation at Winona Ryder’s “Joyce Byers”, a mother whose frantic search for her missing son involved a whole lot of crying.  I was always a big fan of hers, and to see her reduced to a character that didn’t seem proactive until the very end saddened me.  In the sophomore season of the show, she is absolutely everything I wanted her to be the first time around, and more. 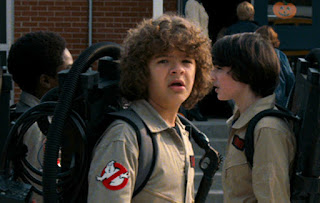 In fact, that is a good summation of the new season: it is more than the first.  So, so much more.  Whereas the effects in the first season made you feel as though you were watching a film from the eighties, this time the effects are bigger, stronger, visually smoother.  There are more chills this time around; there is imagery here that will stick with you, moments that may actually produce a shudder or two.  Or five.  The story is broader, the music even more inclusive, and the score… the theme is recognizable enough, but the underlying music by Kyle Dixon and Michael Stein is all the setting you need as far as mood goes.

And the acting… we did not get to see much of Will Byers (Noah Schnapp) in the first season, but his range as an actor is noticeably pervasive here.  All the kids do a wonderful job with their roles, and the adults get their moments to shine as well.          Caleb McLuaghlin (Lucas) shares more screen time and more involvement rather than be angry for most of the season, Millie Bobby Brown (Eleven) doesn’t look so confused, and Finn Wolfhard (Mike) gets to explore different aspects of his truly layered character.  Yet my favorite, once again, is Gaten Matarazzo.  Dustin is… well, he’s me when I was that age.  Awkward and unsure of himself and the world around him, he gives out his trust when he maybe shouldn’t, and encapsulates the age wonderfully (probably because he is that age, duh…). 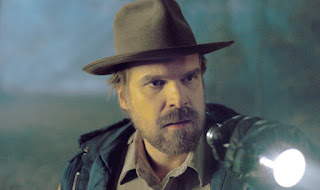 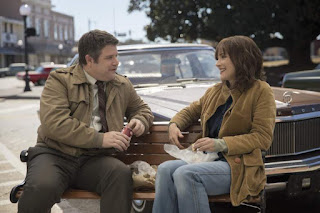 I only have two complaints about this season, and they are rather minor irritants: every car peels out (even the family Pinto, fer cryin’ out loud), and Eleven gets so many nose bleeds you start getting used to it.  And that’s it.

Now, I normally don’t do spoilers, so I’ll do two things here.  First, a quick synopsis: the boys are back together, Eleven is missing, and Will is having issues stemming from the time he spent in the Upside Down.  Now, here comes the bit with the potential spoilers, although all I’m going to do is give you a few character points.  (And, here comes the longest sentence I have ever written in my entire life) Dustin grows teeth and gets a new pet, Mike is sad and angry, Will is going bonkers, Lucas likes a girl, Eleven gets a badass makeover, Chief Hopper tries the single daddy routine, Joyce gets a Goonie for a boyfriend (Sean Astin), Jonathon gets a girlfriend, Nancy gets drunk, Steve starts babysitting, the boys get a new member to the group, Barb is still “missing” (sorry, not sorry), and Paul Reiser (“Carter Burke from ALIENS, wouldn’t you know) gets to be a scientist. 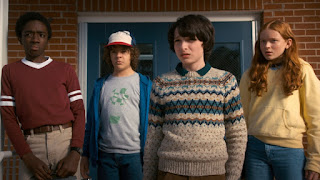 I gave the first season of the show a “B+”, and I stand by that grade.  Even after having watched it three times.  But the second season… The Duffer Brothers have taken their original creation and literally turned it into a monster.  An awesome, sprawling, fantastically engineered monster.

Season 2 Grade: A
Series Grade: A-

-- T.S.Kummelman
Posted by Tacitus Publishing at 8:00 AM No comments:

The 'Not-So-Critical' Critic: THE SNOWMAN

The Quick of It -
I made the joke about this being a Christmas movie on social media before sitting down to watch.  Probably should have used the time to watch some Frosty instead. 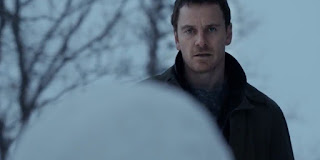 THE SNOWMAN, based on a novel by Jo Nesbo, promises to be much more than what was delivered.  The casting seems impressive with Michael Fassbender at the lead.  The setting could not be more fitting for a bleak atmosphere, centering on a serial killer.  The possible clever moments filled with twists and turns can easily be exploited to make a captivating story.  Ahhh, why screw it up?  I would have rather had my &^%$# frozen to see this plot work than have wasted the potential. 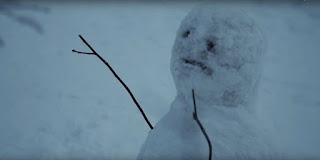 The list of things that bother me can be summed up in a few points.  The scenes are disjointed and there is nothing new or innovative to find along the way.  So bad that it looked like this could be a tribute film to Hitchcock based on the opening.  Nope.  You get a variation of filming styles and shuffled editing, confusing the chance for something chillingly brilliant.  Then, the characters are more like caricatures, flat and unimpressive.  Yes, they work angles for sympathy, so you can buy into their plight.  The most effective approach is, unfortunately, the bad guy.  That is a no-no for the destructive nature needed to get you on the edge of your seat, fearing the worst to come.  I would say no spoilers are included, but if you interpret what I say correctly, everything is nearly spoiled.  And yes, the cinematography does not save this film in my eyes.  I only looked forward to the snowmen left behind after the halfway point in the film, which dragged the whole way through.

Director Tomas Alfredson did it ‘right’ with LET THE RIGHT ONE IN and TINKER TAILOR SOLDIER SPY.  He gets a pass for now, but no do-over.  This one is a melted tragedy.

P.S.  Val Kilmer is looking rough.  So bad, one scene they hide his face so you don’t see his struggle to speak coherently.  A sad moment for us 80’s children.
Posted by Tacitus Publishing at 8:00 AM No comments: 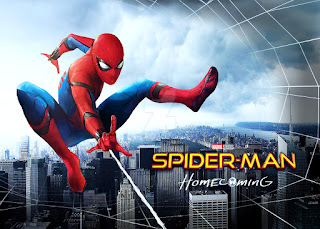 The Marvel Cinematic Universe has had its ups and downs.  In an effort to refresh the groundwork Kevin Feige laid out with the first IRON MAN film, and to make sure the multi-billion-dollar powerhouse isn’t getting too stale, recent attempts have been (for the most part) a successful undertaking.

With last year’s enigmatic DOCTOR STRANGE, none of it felt like grasping at straws so much as it did an expansion of that Universe.  ANT MAN even had its moments of renewed vigor and attitude, despite the troubled production.  Now, teaming with Sony Pictures (who owns the “Spider-Man” entity), Marvel tries shaking another character at us—one that, in recent attempts, began great and ended questionably.  The latest iteration of Peter Parker takes a different turn than its predecessors, making the character a high school sophomore and putting him under the tutelage of none other than Iron Man himself—or, at least, his bodyguard, Happy. 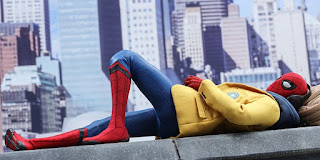 There are wonderful moments of creativity and charm in this film.  Director Jon Watts (COP CAR) asks the question “what would a teenager with super powers do?”  For the most part, that is where this tale gets all of its spunk from.  That, and a fun performance by Michael Keaton (BATMAN, BIRDMAN) as “Vulture”, makes for an attractive coming-of-age film.  There are several instances of a kid just being a kid scattered throughout, but like many teen flicks before it, it tends to stutter just when it is hitting stride.

Those moments of high school fun and angst begin to feel more like vignettes, and the shift in tone feels like a blatant attempt to adultify (yeah, I’m making words up now, so what) the vision.  Because, apparently, the world is only dark and dramatic when the adults get involved. 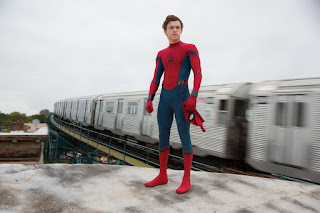 A quick synopsis, in case you missed all those previews: Peter (played by the honestly engaging Tom Holland) is given a new Spidey suit by Stark, and is told to just be the “friendly neighborhood Spider-Man”.  Things get a bit out of control when he uncovers a crime ring that is revamping alien tech and selling these newly constructed weapons to street-level thugs.  I won’t give you too many more details on the plot—always a spoiler-free zone here—but let’s just say that our young hero is forced into a “grow up or shut up” scenario.  And whereas this is a usual moment for every superhero (so much so that you begin dreading those times, the sole purpose of which is as a story arc to build the character into more than just ordinary—something that occurs in every stinkin’ Marvel and DC film), it is also one which feels like a blow to the audience, just as much as it is a blow to Peter.

Don’t get me wrong—this isn’t a horrible film.  Holland does such a good job with the role that you wonder once again at the casting geniuses back at the studio.  The special features are a must—seeing him perform his own stunts, and how they accomplished that awesome little bed flip, is worth the price of the disc alone.

Watts and Company will be back for the next Spidey flick, which is due out in 2019, but we’ll see the webslinger again before that; as a part of the Marvel Universe at last, the character will undoubtedly show up in the next Avengers films.  Let’s just hope they remember that he’s a kid, and sometimes, it’s important to stay that way for a bit.  Superpowers or not.

Film Grade: B
Special Features: B+
Blu-ray Necessary: Most Definitely

- T.S. Kummelman
Posted by Tacitus Publishing at 8:00 AM No comments: