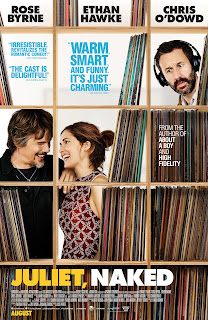 As my regular thirteen readers can attest, I DO NOT have a great deal of love for Ethan Hawke.  Besides TRAINING DAY, the last film I actually enjoyed that he starred in was 1985’s EXPLORERS.  He was a kid back then.

Harsh?  Perhaps.  But he’s always just so…Ethan Hawkish.  And most of his films just don’t gel with me.  I also never cared much for Tom Cruise, but I had to change that view when he allowed himself to get killed over and over for EDGE OF TOMORROW.  And now, with JULIET, NAKED, I may have to change my dislike for Mr. Hawke.

While the film isn’t great, his performance (Sweet Baby Hey-Zeus, how it pains me to say this…) is.  As faded rock star Tucker Crowe, Mr. Hawke fits the role perfectly.  He is disheveled, unsure of himself, and a complete mess when it comes to dealing with his various children.  And, on occasion, he can sing.  Like, actually sing well.  There are moments his voice sounds faulty, yet that seems to be more of a comedic aspect than it does an actual fault of his.  (All this Hawke love is making me feel nauseous.) 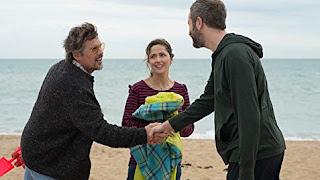 JULIET isn’t about a seminal character named “Juliet”; the film stars Rose Byrne as Annie Platt, a woman whose boyfriend Duncan (the spot-on Chris O’Dowd) has a fixation on Crowe that has lasted decades.  He even hosts a website and a blog concerning all things regarding Crowe and his short-lived music career.  Eventually, his fixation, already a sore spot with Annie, leads to a breakup after he vehemently disagrees with Annie’s online assessment of a newly discovered Crowe album.

It is her review of the “new” material which brings Crowe himself to email her, thus beginning an email friendship which blossoms into more once they finally meet.  So, basically, girl loves boy, girl breaks up with boy, girl falls for boy’s rock idol.  This film is based on the book of the same name by British author Nick Hornby, but unlike his other adapted works (HIGH FIDELITY, ABOUT A BOY), this interpretation falls a bit flat.  There are, of course, certain predictable rom-com elements which occur almost naturally—basically, the same trappings you wish wouldn’t happen all the time.  The fact that it took three writers to produce the screenplay could be telling, as only one of them have had experience adapting a novel to the screen.  Some of Hornby’s quick wit is obviously on display, but not enough to make it nearly as funny as the other adaptations. 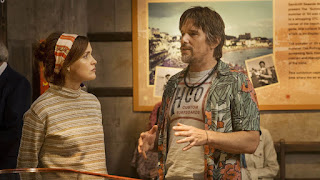 Also, director Jesse Peretz hasn’t directed anything for the big screen since 2006’s low grossing THE EX.  He’s been busy directing plenty of TV, and a lot of it pretty darned well (“Orange is the New Black”, “Girls”, “Nurse Jackie”, and the outstanding “GLOW”).  But this feels more like an exercise in repeated motion—like he’s repeating other director’s motions.  There isn’t a whole lot new here, despite how good the source material may be.

The cast itself is great; Lily Brazier, as Annie’s brazen lesbian sister Ros, is a delightful yet under-used gem, and Azhy Robertson as Jackson, one of Crowe’s children, is a gifted young actor who brightens many of the scenes he is in.  O’Dowd, as mentioned earlier, is great.  His comedic timing has never been better, and gets the most laughs here.  But ultimately, it is Mr. Hawke who steals the spotlight (seriously, this is causing me actual pain now…).

Despite the marvelous cast, it isn’t quite enough to keep the film moving at an even flow.  Some of the jokes become predictable, as do some of the scenarios.  Which is a shame, considering that if I’m going to go through this much trouble enjoying a performance by the same guy that thought SINISTER was a swell idea, I should at least really like the film he’s in.

- T.S.Kummelman
Posted by Tacitus Publishing at 8:00 AM No comments: 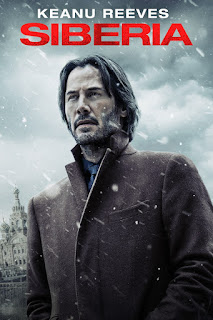 You ever feel like having a sit-down with a director?  A face-to-face, so you can explain the facts of life (see: effective storytelling) to them?  Maybe check to make sure they are on the right medication?

First time director Matthew Ross needs one of those talks.  So does Scott B. Smith, the man who wrote the gloriously noir A SIMPLE PLAN.  They both need a good talking to, based on what they have provided us with in SIBERIA.  Don’t get me wrong; I wanted to like this film.  It has several key elements going for it from the start, which, for the first few minutes, is a nice breath of fresh air.  You get Keanu Reeves as an international diamond seller, who, from the start of the film, is in trouble.  There are several touches at the start which are reminiscent of Hitchcock, and of the great Robert Aldrich (I’m thinking the noir of KISS ME DEADLY, more than the battles of THE DIRTY DOZEN).  The cinematography by Eric Koretz is surprisingly masterful; he captures the Russian countryside (okay, it was actually filmed in Canada, but damned if he doesn’t make you believe it’s Russia) with a careful, seemingly wizened eye, despite the fact that this is only his fourth studio film.

If you can forgive the typical Hollywood screenwriting trappings, you’ll make it through the first fifteen minutes okay.  At least until you get to the first scene with the gorgeous and wonderfully talented Ana Ularu (“Emerald City”, INFERNO); her presence is a welcome, exquisite mark of beauty upon a story which isn’t quite moving at the right pace.  And no matter how much Koretz’s camera loves the wilderness and Ms. Ularu, soon after her introduction, the film loses focus in such a way that nothing going on really seems worth your time. 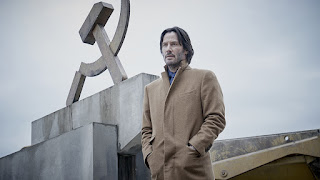 While trying to hornswoggle the Russian mob boss, Reeves’ shifty Lucas Hill sorta kinda falls in love with Ms. Ularu’s Katya (which is easy to do).  So the film goes from Hitchcockian thriller to an Aldrich kind of hardboiled noir to a love story/booty call, and then to a caper, and some more love, and then…oh, bloody hell.  Honestly, kids, just watch every scene she’s in, and fast forward through everything else.

Seriously.  First five minutes, fast-forward about ten, watch Katya, fast forward again, watch more Katya…you get the picture.  Or, hopefully, you actually DON’T get the picture.  The movie wants to be far too many things for it to be taken seriously as any one thing.  It isn’t a problem with mixed genres, it isn’t a problem with crime vs. romance vs. action vs. moral dilemmas.  It is a matter of clunky storytelling.  It’s like being in a car with someone that can’t drive a stick shift and keeps grinding the gears (me, for instance).  It’s like watching a spider monkey trying to have relations with a shark.  It’s like watching me trying to fit into an XL instead of the 2X.  It’s just uncomfortable to watch much of the time, and it makes you wince a lot (or, as in the case of me with the shirt, it makes you look away, and perhaps wash your eyes out afterwards). 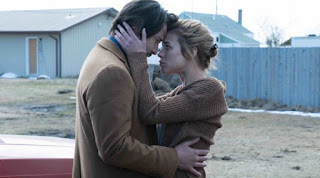 I have no issues with Mr. Reeves—I’ve always been a fan, even when my friends accuse him of being wooden.  He isn’t wooden.  He’s just brooding.  Internally.  And really, really still.  I almost didn’t have a problem with the story—until it got downright insulting.  Seriously, how many times do we have to see characters make the same stupid mistakes?  HAVE NONE OF THEM EVER WATCHED A FREAKING MOVIE BEFORE?!?

Ahem.  Sorry (not).  Listen; ultimately, you just want to stay away from this one.  The cinematography and the wonderful job by Ms. Ularu isn’t enough to save this stinker.  Nor is the fact that, unlike many other films that take place in other countries, the casting director actually hired real-life Russians and/or people from that actual continent to act in this film.

And the other thing which irritated me like a thigh rash in summer humidity?  The fact that I had to watch TEN company logos at the beginning of the film.  It used to be that if there were more than two writers, you could expect a film to suck marmoset nipples; now, it’s how many freaking production companies insist on having their names on the front of something.  As if having their name in the opening credits wasn’t enough, they all wanted to take their friends to the movies, point, and say, “see?  Besides my logo, the only other gorgeous thing you’re gonna see is Ana Ularu.”

Film Grade: D
Special Features: Seriously?  If you think for one minute I’m wasting any more time on this…
Blu-ray Necessary: Oh hell no

- T.S. Kummelman
Posted by Tacitus Publishing at 8:00 AM No comments: 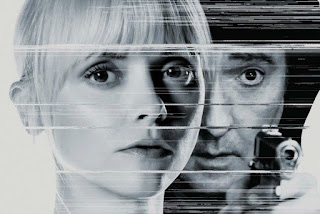 Well folks, I’m not going to waste your time on this one.  No need to have 90’s ‘flashbacks’… if you were even born or remember those times.

The story focuses on a couple, Lauren (Christina Ricci of CASPER, SLEEPY HOLLOW, and SPEED RACER) and Russell Curran (Brendan Fletcher of FREDDY VS. JASON, RV, and AIR BUD), who moves into a SMART building.  At the start, you are led to believe that Lauren might be a borderline schizophrenic, having visions and nightmares.  She is your unreliable protagonist that drives the plot.  You are never sure how real her visions are.  So, when unusual events and the building seem to be twisting her reality, you are left wondering.

In point, DISTORTED hinges on the audience’s fear of being watched, someone seizing control of a fully-automated building to mess with the residents… or whatever.  This is where the movie failed for me. Yeah, you could have pulled this off about two decades ago, but we are living in different times.

Having flashing images on the TV and other weird things, the undertone of a hidden agenda at play, is easy enough to sniff out. Her visions are mainly used as a way to interject jumps and scary pictures to create tension.  We, as a society, have advanced far beyond this fear thanks to the Information Age.  Everyone already knows that we are constantly watched, one way or another.  The government, cell phones, and even Amazon knows everything about you.  The 90’s and early 2000’s had a rash of movies on this topic…  BAIT, ENEMY OF THE STATE, CONSPIRACY THEORY, HACKERS, JACOB’S LADDER, THE TRUMAN SHOW, THE MATRIX (if you dare)… plenty of Orwellian stories.  DISTORTED did nothing to add to the genre.  Oh, and John Cusack, in his brief moments, didn’t offer anything to elevate the project.

-- James S. Austin
Posted by Tacitus Publishing at 8:00 AM No comments: