“SKumm’s Thoughts” - THE DEATH OF STALIN 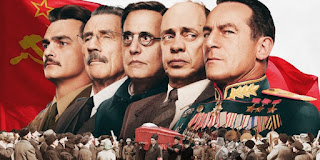 Recently, I lambasted a film (RED SPARROW, for those keeping track—all twelve of you…) for replacing Russian accents with British ones, and relegating the few actual Russian actors that were in the film to secondary roles.

I did so because it was a film trying rather hard to be taken seriously.  It was a spy thriller, a genre that doesn’t leave a whole lot of room for comedy.  So when THE DEATH OF STALIN starts, and there are no Russian accents—and keep in mind that this film takes place entirely in Russia—it comes across as a Mel Brooks-type of comedic move.  I mean, no one even tries for an accent other than from their native country.  Is this a poke at current filmmaking’s efforts to cast Brits in the roles of any and every foreign character?  Is it a jab at social constructs, and Hollywood’s ever-present underrepresentation of foreign actors and actresses?

Nope.  It is all part of the joke.  Honestly, I wouldn’t want to see Steve Buscemi (RESERVOIR DOGS, FARGO) speaking with any voice other than his own, and the joke works best for him.  And the last time Jeffrey Tambor (“Arrested Development”, HELLBOY) sounded good with an altered voice was when he was trying to belt out “Puttin’ on the Ritz” in Brooks’ YOUNG FRANKENSTEIN.  Besides Michael Palin (everything Monty Python), these are your main reasons for watching this film.  It isn’t because writer/director Armando Iannucci crafted a hilarious script about the demise of the Russian dictator and the subsequent struggle for power immediately following his death.  Because, unfortunately, he did not.

There are some funny moments to the film, but its humor is too inconsistent to truly classify this as a comedy.  From the start, the biggest joke is that everyone is afraid of being killed; Stalin (played with a gleeful sort of vileness by Adrian McLoughlin) kept lists of people that he didn’t like—those that had either offended him or wronged him—and those people were summarily arrested and/or executed.  We see this fear alive and well in a radio station, and station manager Andreyev’s (played by Paddy Considine, who does wonders with his role) reaction to discovering that Stalin wants a recording of that night’s performance—which wasn’t recorded.  His efforts to re-seat the audience and convince the orchestra to perform again sets up a feeling of slapstick bordering on screwball comedy.  It is a feeling that, to the detriment of the film, gets left behind. 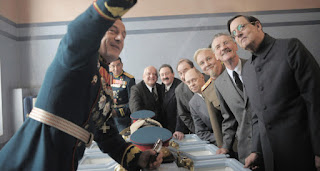 Within the script are too many lost opportunities.  Slapstick would have worked wonderfully for the film; indeed, some of the scenes are played that way, but Ianucci loses focus of his style too often.  You want the film to be better; there is potential here, and with a cast as game as this one is, you can’t help but wonder why he would choose to switch gears so suddenly and on so many occasions.  There is a much funnier film here, one which deserves a more consistent method of storytelling, one which relies less on heavy-handed satire and more on the physical comedy which looked so appropriate to the subject matter.  You can’t just be funny part of the time, and go serious for brief moments of levity.  One death is funny, yet another is not.  It almost feels as though there is a statement being made here, but it’s a long statement that needs a whole lot of explaining.  And that isn’t comedy, kids.

Another issue is the main “joke” of the film—that Stalin’s paranoia had everyone in the country wondering if they were next on the list.  At first it is used to illicit laughs, and it works.  But the dark turn of the joke, not to mention it being used far too many times for it to have no other choice than be developed as a dramatic plot device, makes the joke stale.  I understand that this was a time of fear for that country, but dammit, the film is billed as a freaking comedy.

It tries its best to make you laugh, and there are some genuinely funny lines.  Tambor is especially effective, yet even he seems to lose the comedic flair.  But there are no specific scenes that stand out to me as spectacularly hilarious, and that is where the script, or at least Ianucci’s directorial efforts, leave me wanting.

I can’t help but wonder how this would have turned out had it been a Mel Brooks film.  That is what happens when you have a fully capable cast, yet nothing memorable for them to do; you wonder how better the story could have been told, had there been another storyteller in charge.

‘Blu-ray or Bust’ - THE COMMUTER 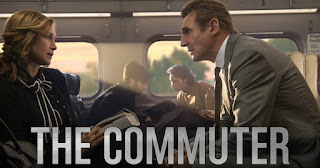 Liam Neeson kinda backed himself into a corner.

With the success of his action films, the sixty-seven-year-old (yeah, you read that correctly) actor did something we haven’t seen too much of: an over-fifties legitimately good actor shooting up bad guys.  Besides Bruce Willis (who is sixty-five) and Sean Connery (who’s last major film was an actioner, albeit not a very good one…), few older actors see the level of success they have had in action-oriented cinema.

Mr. Neeson is an exception, really, because he was such a late bloomer to the genre.  2008’s TAKEN seemed to thrust him into the action movie spotlight; while his long career was no stranger to films of that nature, many of his projects were dramas.  From TV mini-series to an Oscar nomination for his titular role in SCHINDLER’S LIST, he was a thought-provoking actor, a man who oozed intelligence and quiet charisma.  Then he started shootin’ folks. 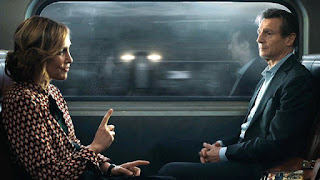 THE COMMUTER stars Mr. Neeson as insurance salesman Michael MacCauley, a working Joe—and ex-cop—who takes the train to work every day.  It just so happens that he is singled out to identify a particular fellow passenger whom certain parties want dead on the same day he is fired, so the money being offered for him to place a GPS device on said passenger is his initial motivation.  One of the lovely aspects of this film is that it keeps you guessing; while Michael’s reasons for doing what the nefarious woman who tasked him with the job (the wonderfully unsympathetic Vera Farmiga) changes, and predictably so, the rest of this Hitchcockian tale unfolds in unexpected ways.

You have first-time screenwriters Byron Willinger and Philip de Blasi to thank for that.  Their script is smart and precise, and director Jaume Collet-Serra (a man who has worked with Mr. Neeson on three other films) paces the story wonderfully.  Add a moving and affective score by Roque Baños and you have nearly all the elements needed to make a gripping thriller.  But it is the cinematography by Paul Cameron which places this film above so many others that try to capture what Alfred Hitchcock did so eloquently back in the day.  He turns a confined space into the most expansive of settings; you are stuck on a train with Mr. Neeson and Company for the majority of the film, and yet despite the limitations, his eye sweeps through the set with unerring ease.

My only complaint is the occasionally questionable special effects.  Nothing glaring—remember, I’m the critical critic, and my decades of watching/studying film at times make me a bit unforgiving.  But when every single stinkin’ detail is held to such a high standard as the rest of the film, you would hope that a few moments of CGI would be done well enough to not distract from everyone else’s hard work.  And while those few times stood out to me, they are not enough to detract—or DERAIL (yeah, yeah, PUN ALERT)—from the rest of the action. 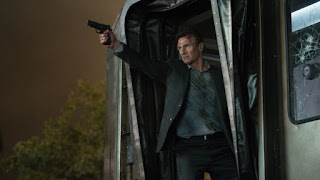 On a totally unrelated note, I’d be remiss if I didn’t point out the film’s opening sequence.  Not only does Collett-Serra know his way around an action film, but his flair for ingenuity is something worth keeping an eye on.  The way he sets up MacCauley’s daily routine is nearly ingenious, and is thrilling to watch even if it isn’t part of the action unfolding in the rest of the film.  Some directors come up with a brilliant opening sequence that does not fit the rest of the film (one spectacular example of this is 2016’s THE FOREST, in which the first five-seven minutes was better than anything else in the movie); it is either tonally different or just doesn’t fit the rest of the storytelling.  But Collett-Serra’s opening here is a strong start to an efficient and eloquent means of storytelling which works wonderfully.

The special features include a nine minute behind-the-scenes which is important to watch based on location alone, and a four minute one that is all about how they shot the film.  It is the latter of the two that is most impressive, based solely on the innovative aspects of the director’s technical methodology.

It does not appear that the action genre is done with Mr. Neeson just yet; he will be starring in the upcoming MARLOWE (based on the Raymond Chandler private detective) and HARD POWDER.  Either of those titles sound like he’s looking to take a dramatic break...?

The 'Not-So-Critical' Critic: A QUIET PLACE The Quick of It -
For horror-monster films, A QUIET PLACE ranks up there.  Could also sell this as another Cloverfield installment.

This film engages the senses at the highest level.  There is no holding back.  Yes, they incorporate ‘jump scares’, you are warned.  But it is not excessive and are well-timed.  Don’t look at me like that, I can admit I jumped once… maybe twice.  Leave my Man Card alone.  The attention to detail orchestrated by those behind the camera is on display in every scene.  The focus on the simpler sounds, the artistically chosen shots, and the tension that comes from building up particular situations keeps you on the edge of your seat. 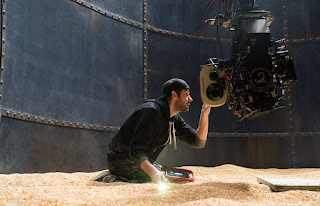 The story centers on an isolated family living on a farm who are trapped in a world now frightened to make a noise.  Large creatures have appeared all over the globe and are pure killing machines.  They are blind but have a highly evolved way of hearing.  Oh, and they happen to be heavily armored.  The father, played by John Krasinski (better known as Jim Halpert from ‘The Office’, who also happened to direct this little piece, does a stupendous job of both setting the tone while selling it in his emotionally charged character.  This is just as much a drama as a surreal horror flick.  Who better to pair him with than Emily Blunt, an unquestionably talented actress.  The casting of the kids shows Krasinski required a careful process, as demonstrated by only hiring the young, deaf actress Millicent Simmonds to play his deaf daughter.  Everyone contributes to make this family relatable.  And with a patient screenplay to give just enough time spent with this family, you become fully invested in their survival. 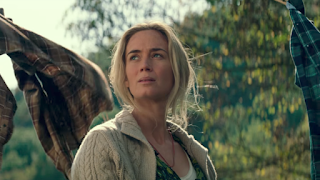 The creature effects are fantastic.  You get everything you want.  First, the quick glimpses.  Then, a display of their destructive nature.  And finally, you get everything.  So much so, it becomes a frightful nightmare, hoping the family can live through the madness found in not making a sound. 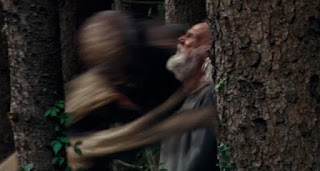 Unfortunately, I did have some problems.  You must suspend a lot of common sense questions that immediately poke holes into the story.  I tell you now, just ignore that little voice in the back of your head so you can get the full experience first.  It is worth it.  Then walk out and ask all the questions you want.  That is why I’ll end this review early, as a way to show I will remain ‘quiet’ on the matter…

Grade: B+
Posted by Tacitus Publishing at 8:00 AM No comments: