The 'Not-So-Critical' Critic: THE HITMAN’S BODYGUARD 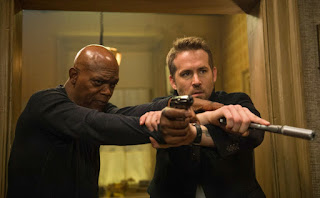 The Quick of It -
Another summer, sleeper ‘hit’ on our hands, boys and girls.

I know, this seems like it would be a no-brainer.  But one always questions a new flick that seems like a film you have seen a hundred times before.  This is, and is not, one of those films. 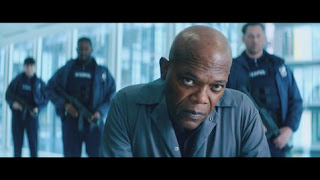 THE HITMAN’S BODYGUARD is not your typical ‘buddy film’.  I would classify this as a sarcastically-driven duel-off between two of the most notably charismatic actors of our generation – Ryan Reynolds and Samuel L. Jackson.  THB is about a professional bodyguard who lost his prestigious agency and a detained hitman who has info on a Russian politician, the President of Belarus, which he is using as currency to get his wife absolved of her crimes.  After a botched transfer moving Darius Kincaid (Jackson) by the Interpol, Michael Bryce (Reynolds) is called in to get Kincaid to the International Court of Justice, where President Dukhovich (Gary Oldman) is on trial for the ‘usual’ atrocities a film-dictator commits. 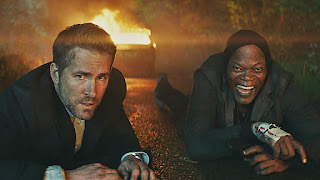 Young director Patrick Hughes (of RED HILL and THE EXPENDABLES 3) and writer Tom O’Connor make a resounding statement behind the talent they command beyond the camera.  If you didn’t know, which you will now, this film was actually not written with Reynolds and Jackson in mind.  The screenplay was completed before 2005 and has sat on the ‘Black List’ (a “most liked” list of screenplays not yet produced) since then.

This film has everything needed to make it entertaining on so many levels.  It has unrelenting comedic moments.  It has heart-pounding action.  And where needed, it has character depth and a sense of twisted moral compass.  But it truly is the banter between our leads that fuels this adrenalin rush.  There is no denying that “mother-%$#@*&” was dropped so many times, and it only made me smile the more. 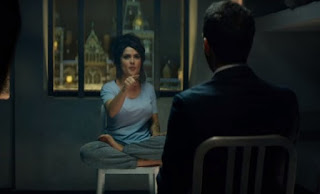 The leading ladies were not bad, either.  The quieter Elodie Yung (our Elektra from the Netflix series) is the grounding element for Reynolds while Salma Hayek matches the intensity of Jackson, probably eclipsing him with her ‘Spanish fire’.  Hayek is in a Dutch prison for the film, but you wonder who really was the one that controlled the environment.  You must understand… she had her cellmate stand in the corner most of the time, even making her fart from fear.  Yeah, that bad.

So, if you are looking for an evening filled with laughs anytime soon, make your way to the theater… “mother-%$#@*&”!!!

Grade: A-
Posted by Tacitus Publishing at 8:00 AM No comments:

‘Blu-ray or Bust’ - GUARDIANS OF THE GALAXY VOL 2

Don’t get me wrong here—I am a huge fan of what James Gunn and Company did with the first GUARDIANS OF THE GALAXY.  It served as a much-needed change in adrenaline in the Marvel Cinematic Universe, and was a breath of fresh air.

But when I first saw the second installment in its theatrical release, it felt like too much.  Too much CGI, too much action, and way too much spiteful banter between Quill (Chris Pratt) and Rocket (Bradley Cooper).  It took viewing this on a smaller screen to appreciate the film more.  It isn’t that I’m too old to appreciate film in its natural format—I love the movies, and will always adore seeing them on the “big screen”.  But it helped to compartmentalize everything I was seeing, and even feeling, by watching on my computer. 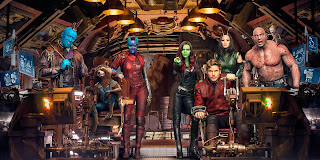 The follow-up to the 2014 classic centers around Quill finding his daddy, played with the usual charm and swagger of one legendary Kurt Russell.  His dad is an actual planet, which you would think garner more jokes from the crew, but despite Drax (Dave Bautista, who owns every scene he is in) pondering how Peter was conceived, the subject is pretty much left alone.  Not something that would have been done the first time around. 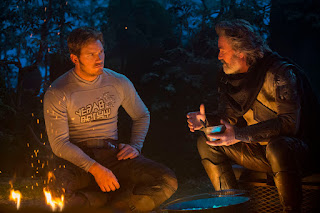 Director Gunn has said that the first film was about this ragtag bunch off criminals becoming a family, and this sequel is about them being a family.  While Peter and his daddy issue is the predominant storyline, you get more on the Gamora/Nebula history, (Zoe Saldana and Karen Gillian, respectively) and a few nuggets pertaining to the other characters.  But those nuggets just aren’t enough.  Instead of more backstory on Rocket and/or Groot (Vin Diesel, who not only does his “I am Groot” bit, but also gets to growl this time around), we get more CGI.

One other thing I absolutely must gripe about: music from THE AVENGERS.  It happens a few times during the film, and it irritated the Baby Groot outta me.  I understand that the studio is looking to cross all their films over during The Infinity War storyline, but really, I don’t need any not-so-subtle hints while I’m watching the Guardians in action.  Stick with the same type of soundtrack you did the first time around—it helped set this style of storytelling apart from what has become almost typical of other Marvel films.  Also, the music selection; there are more hits than there are misses when it comes to the “Awesome Mix Tape” this time around, but some of the selections just plain don’t work.  That being said, the ones that do work do so on a level even higher that the first film.  The scene aboard Yondu’s (Michael Rooker) ship, as he dispatches his mutinous crew to “Come a Little Bit Closer” by Jay and the Americans is sheer genius in its execution.

Of course, this is a must on Blu-ray, if not for the excessive CGI, then for the soundtrack, and the score by Tyler Bates. There are a few unnecessary deleted scenes, a decent gag reel, and four behind-the-scenes docs which shed more light on Gunn’s filmmaking process—including how they used music on set.

I sincerely hope that the next GUARDIANS film gets back to its roots.  Splitting up the team makes for less of a good time, and you should never have to trade excessive CGI action sequences for time with a family that is fun to watch being dysfunctional.  But this is still a worthy chapter in the MCU, and not least of which because: KURT FREAKING RUSSELL.

“Twisted Minds of the Creators: The Thrilling Stories You Might Be Missing on NETFLIX and HULU”


“Twisted Minds of the Creators: The Thrilling Stories You Might Be Missing on NETFLIX and HULU” 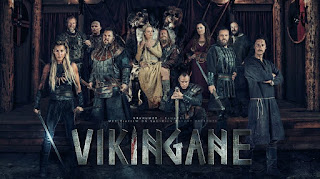 Norway brings a new, light-hearted take on the life of a Viking.  This perspective is like no other.  Trust me…  I would describe it as “Vikings” being impregnated with Monty Python seed, and then a spawn of awkward moments is born.  This love-child may be a hit or miss for you, but I openly laughed at some of the repartee.  The frank expressions and theatrical music drives home a serious nature that is only cracked by the clever dialogue that keeps you rolling.  The story is about a small village and those trying to survive during the Viking Age, of sorts.  This is a short stint but promises to make you never look upon Vikings the same way again… ever. 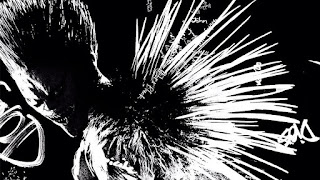 Get over it… this is not your daddy’s anime we are talking about.  A gifted, young actor with a trusting face, Nat Wolff (of THE FAULT IN OUR STARS, PAPER TOWNS, STUCK IN LOVE), breaks his trend by slipping into the shoes of Light Turner.  Light is bestowed the Death Note, a book that will allow one to orchestrate the death of anyone, when knowing their name and can picture their face.  He takes the name of Kira and begins a crusade to kill all those he feels deserving.  You root for him, which then makes you spiral into his moral dilemma as the events unfold in a not-so foreseeable way.  His co-conspirator Mia Sutton, played by Margaret Qualley (of THE NICE GUYS, THE LEFTOVERS), does nothing to help the situation.  And his counterpart ‘L’, the growing talent Lakeith Stanfield (of GET OUT, STRAIGHT OUTTA COMPTON), grips you with his manic behavior as he hunts for Kira.  But the standout, which is no surprise if you have seen the anime, is Ryuk the Death God, voiced by Willem Dafoe.  Yes, things are chopped out and this may not be a pleasing adaptation… but what an insane ride. 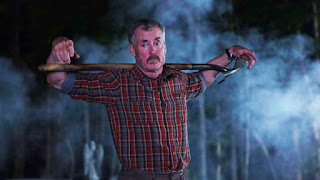 The brash John C. McGinley (everyone’s favorite doctor on “Scrubs”, PLATOON, SEVEN, THE ROCK) fits himself into another Dr. Perry Cox role.  I love him for it… and realize how much I missed Cox.  Ahem…  He plays a sheriff in a small town, briefly.  Janet Varney (“The Legend of Korra”, DRILLBIT TAYLOR, CATWOMAN, “Psych”) is his replacement after his imposed retirement after the death of his wife.  You see, the sheriffs of the town are cursed.  That is what happens when you burn 172 witches.  Well, maybe not.  Just watch, especially if you are an EVIL DEAD / Bruce Campbell fan. 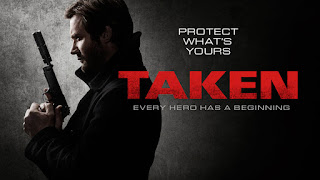 If you are unfamiliar with the Taken storyline, you live under a rock… and probably wouldn’t be reading this.  So, I assume you do.  Why watch this TV series?  “The Transporter” did nothing to help give confidence in TV adaptations.  What if I told you Rollo of “Vikings” was playing another bad ass?  What if I told you the attention to detail found in “The Unit”, a fantastic show, along with one of their own, is found here?  What if I told you your daughter will be missing in the next 24 hours if you don’t listen to me… ah, a little too far…  Clive Standen plays a younger Bryan Mills, who is recruited by a special unit that handles the quieter ‘jobs’.  The task force is led by the still-gorgeous Jennifer Beals (of THE BOOK OF ELI, THE L WORD, but best known for FLASHDANCE).  Time has not touched her.  TAKEN is the final touch to on your viewing recommendations and is a thrill-ride you would not expect.

-- James S. Austin
Posted by Tacitus Publishing at 8:00 AM No comments: