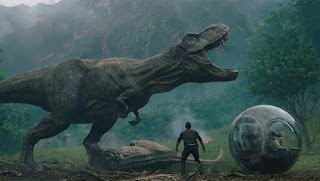 The Quick of It -
With the way this week for available reviews was shaping up, I thought we had a pair of weak sequels.  I can now definitively say, never underestimate the power of dinosaurs, even in movies. 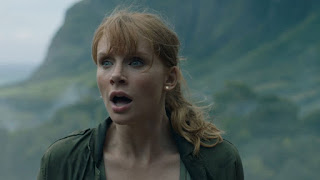 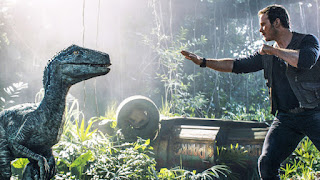 Four years following the tragic shutdown of the park on Isla Nublar, Owen Grady (Chris Pratt) and Claire Dearing (Bryce Dallas Howard) are asked to aid in saving several species before the island is destroyed by the highly-active and ready to erupt volcano.  JW2 is ‘not’ surprisingly the same sequences and bad decisions we’ve come to love from the other films.  They get twisted up a little, but no denying the similarities.  I fell for each one, embracing the glory of dinosaurs and the stupid bad guys. 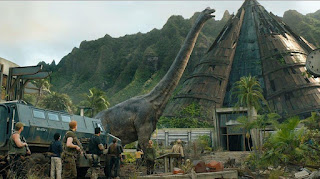 The behind-the-camera essentials are unquestionably crucial to this successful addition.  Director J.A. Bayona shows he did his homework.  The shot arrangements and overall tone is spot-on.  I could almost say he apprenticed under Spielberg.  With the original writers behind the screenplay, Derek Connolly and Colin Trevorrow, also helps.  They continue to prove their valued contribution to the Jurassic Universe.  Mad props also goes out to this generation’s John Williams, Michael Giacchino.  He is behind the scores of STAR TREK, ROGUE ONE, SPIDER-MAN: HOMECOMING, DOCTOR STRANGE, WAR FOR THE PLANET OF THE APES, etc…  Impressive.

As I sat there, JW2 put me on a rollercoaster ride of emotions.  I laughed.  I cried.  And, in the end, I conceded my original opinion as unfairly dismissal.  Watching helpless (fake) dinosaurs hits you right in the feels.

Grade: A-
Posted by Tacitus Publishing at 8:00 AM No comments: 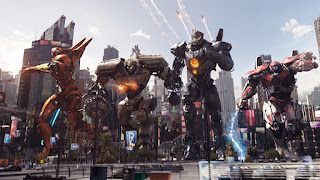 Disappointment, thy name is “Sequel”.

Recently, we’ve seen a few series reboots (TOMB RAIDER, JUMANJI) that worked spectacularly—possibly due to the fact that the films are decades apart.  But five years after PACIFIC RIM, a sequel, which was originally stuck in development hell, and saw its original creator and director step away from the project (although he is given a production credit here), seemed a long shot.  Methinks they should have sat on this one for a bit longer…

UPRISING, or, as I like to call it, PACIFIC RIM: UPCHUCKING, sees a new threat in the Kaiju’s invasion of earth, this time with the help of nefarious humans and one infected scientist.  Enter John Boyega as Jake Pentecost, son of Stacker Pentecost, the hero of the first film.  He is a scrapper, stealing parts from defunct Jaegers in an effort to support his lavish lifestyle of living in abandoned mansions.  (yeah, doesn’t make much sense to me either, as he brags about being a squatter) (more on squatting later…)  He gets drafted into the functioning Jaeger program by his half-sister Mako, survivor of the first film.  From there, it all gets predictable and, at times, utterly monotonous. 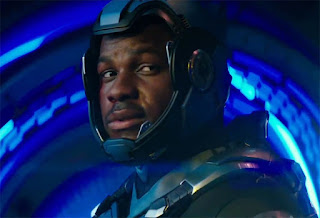 I hoped for something better, something that showed a bit more effort.  The effects are fine—honestly, if you just HAVE TO HAVE A TURD IN YOUR MOVIE COLLECTION, you might as well get this on Blu-ray.  The few battles that there are, not to mention the booming footfalls and resounding punches and grunts, will make it easier to stomach in the format.  But just barely.

Should we point fingers?  Should we seek out someone to blame?  Not Warner Brothers, that’s for sure—they distributed the first, but were smart enough to pass on this one.  Also, you cannot blame Boyega; riding high on the success of his STAR WARS films, he is allowed to make a few mistakes.  And he does fine here, even eliciting a few chuckles along the way.

How about the director?  Prior to this, his theatrical debut, Steven S. DeKnight directed exactly one episode of Netflix’s “Daredevil”, one episode of Fox’s defunct “Dollhouse”, two episodes of “Smallville”, and three of “Angel”.  He also wrote several episodes of the “Spartacus” series, and has produced a number of series.  Including one called “Travel Boobs”. 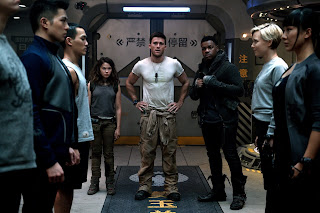 But as this was his theatrical debut, maybe we shouldn’t point the finger at him.  The studio probably got him cheap, and, really, who wouldn’t want to direct a big-time studio movie?

Okay, so perhaps we shouldn’t lay all of the blame at the feet of an inexperienced director.  Let’s take a look at the writers—there are three besides DeKnight, two of whom also wrote mostly for television, and the other adapted the “Maze Runner” books.  As I am a near failure at writing, who am I to admonish those that have found success with their screenwriting abilities?  Even if said success resulted in this mess, which was the COMBINED EFFORTS OF FOUR EXPERIENCED WRITERS.

From the rehashed and over-used dialogue (“We’ve only got one shot at this!”  “Then we better make it count!”) to the easy set-up plot points (hmm, I wonder if that little bitty homemade Jaeger is going to come in handy later…), this film is inadvertently brimming with references to other, better films.  “Gee, TS,” you are wondering, “can’t you just watch something and have fun?”. 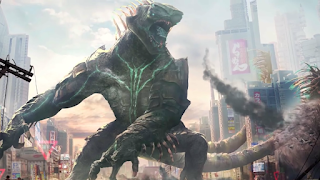 Nope.  Not when it is this horrible.  I’ll be the first to admit that the original PACIFIC RIM is a total guilty pleasure of mine.  I love what Guillermo del Toro did with the ideas, the effects, even the cheesy dialogue.  It all worked wonderfully in that you didn’t care how corny most of it was, you just couldn’t wait for the next big monster battle.  With this far-too late and far-too underwhelming sequel…well, it’s like a dog dragging its butt over a finely woven carpet.  Sorry for the visual, but this one is a stain, kids—and it’s the kind that doesn’t wash out so easily.

In the words of The Dude Himself, “that rug brought the whole room together”.  This one just craps it all up.

Film Grade: D
Special Features: Honestly, who cares?
Blu-ray Necessary: Absolutely (but only if you feel like justifying that dog turd in your movie collection to all of your friends and family…)

- T.S.Kummelman
Posted by Tacitus Publishing at 8:00 AM No comments: