Taylor Sheridan used to be an actor.  His first role was on “Walker, Texas Ranger”—you know, the one with Chuck Norris.

He played several bit roles on other shows, eventually graduating to arcs on episodic shows like “Veronica Mars” and “Sons of Anarchy”.  He still acts occasionally, and has a few upcoming roles in films.  But it is not his acting skills you need to be paying attention to—this is the same man that wrote SICARIO and HELL OR HIGH WATER, two films that were nominated for several Academy Awards.

In his second directorial effort, he spins yet another effective and sometimes deeply unsettling tale of the human condition that drags you to the edge of your seat and then slaps you in the face repeatedly with the ring-hand of reality.  Us human folk constantly walk through our lives in a gray area, and sometimes, that is the only way to survive the darkness of others.  Sheridan once again crafts characters that we want to be heroes, people from everyday life that have extraordinary jobs who must constantly make leaps of faith when it comes to relying on the others around them. 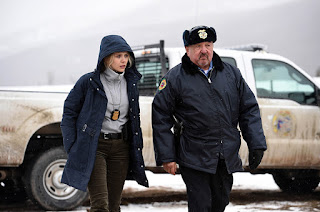 WIND RIVER tells the tale of Cory Lambert and Jane Banner, who are thrust into a murder mystery on the Cold River Indian Reservation in Wyoming.  Banner (Elizabeth Olsen, proving once again that she is the best actress in that particular family) is a young FBI agent assigned to the case and Lambert is the Fish and Wildlife man—essentially a tracker—tasked with helping her navigate the landscape and the people who populate it.  On hand are—and with the latest “white-washing” going on in Hollywood, this should shut a few folks up for a bit—are actual Native American actors that ground the films authenticity, and lend it the humanity the film so desperately needs.  Veteran Graham Greene (THE GREEN MILE, “Longmire”), Apesanahkwat (“Longmire”, “Northern Exposure”), and Tantoo Cardinal (DANCES WITH WOLVES, “Blackstone”) are among the honest, yet troubled, performances.  That is one of the aspects of Sheridan’s writing that makes his works so grounded: the genuineness of the written characters themselves, and the pain of living through heartbreak and adversity, is what drives us all, and these struggles are tantamount to the story arcs of each individual on screen. 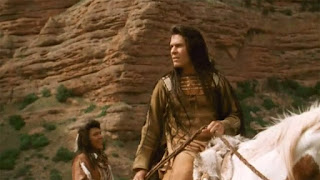 But you notice how I left someone out of these proceedings?  Lambert is played by Jeremy Renner—you’ll remember him best as “Hawkeye” from the AVENGERS films.  Seven years ago, he was nominated for an Oscar for his portrayal of an Army bomb squad specialist in THE HURT LOCKER.  He should have won, but he didn’t.  Pay close attention to next year’s Oscars, because WIND RIVER should see wins for Renner and Sheridan.  His portrayal of Lambert, a divorced father still dealing with a recent family heartbreak, is wrenching at times.  There are times when his silences are just as provocative as Sheridan’s dialogue, and the long cuts, not to mention the careful eye of cinematographer Ben Richardson (the genius BEASTS OF THE SOUTHERN WILD, THE FAULT IN OUR STARS) breathe more life and resonance into Renner’s stony features than you would expect.

Sheridan’s next story is a follow-up to SICARIO.  But he’s going to have a tough time topping this tale of humanity, this story of the struggle we all face with that gray line which separates us from our inner animals.  And if he and Renner aren’t at least nominated for their efforts here, certain members of the Academy need to be taken for a long hike in the snow.  Barefoot.


Posted by Tacitus Publishing at 8:00 AM No comments:

The 'Not-So-Critical' Critic: ALL EYEZ ON ME 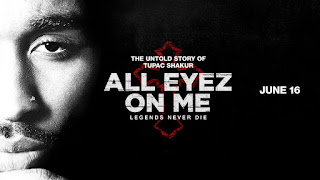 I sought enlightenment… and was disappointed.

Gangsta Rap became popular just after my time in high school and my exposure to the lesser known Hip-Hop performers.  My limited contact included some of the original inspirations and some of the founding members, the ones who paved the way to made it fashionable… from the Run DMC beginnings to NWA’s blossoming (yeah, word choice on a topic like this can be fun).  All that happened after seemed to begin to spiral away from the core message I had come to understand, kind of like this kneeling during the National Anthem kerfuffle.  It evolved into lyrics about the ‘ladies’ (translation… b%$ches and hoes) and money… and street cred.  Don’t think me too far from the hardcore, I will always appreciate Ice-T’s Body Count.  Not one to promote the shooting of cops, but his message was quite topical and a splash of cold water on the clueless masses.  He ruffled a few feathers and it was needed.

As an attempt for a much-needed biopic on things that need to be brought into the light, this one was way too ‘clean’ and fails to give any credence on the true struggle.  It held no sense of realism to the actual nature and life of Tupac and the things he experienced.  There were only quick glimpses and probably plenty of ‘white-washing’ of what really transpired.  STRAIGHT OUTTA COMPTON was a victim of said ‘scrubbing’ but it was still an entertaining story and you felt the vibe in the soundtrack.  The one thing I saw as eerie though, Demetrius Shipp Jr. was the spittin’ image of Tupac and he was about as genuine as you can get with this limited script. 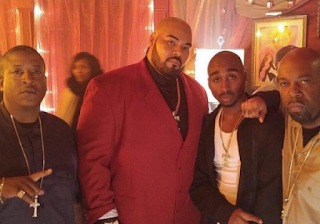 With ALL EYEZ, I was hoping to understand more about the shift in the mainstream Hip-Hop.  I just don’t think this film captured Tupac’s life story and the message he really was conveying, something they tried to pound into you in the dialogue.  After thinking on it, I just couldn’t shake the sense that the story was full of holes, and not the ones typically found in a life story film.  The one thing I DO want now is a full, unedited biopic of Suge Knight.  I believe his crazy-ass story cannot avoid the ‘thug life’ found in that period’s music.  This is the biopic we deserve.

Grade: C-
Posted by Tacitus Publishing at 8:00 AM No comments: