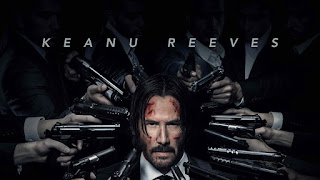 I reviewed this film when it was first released in theaters, and a second viewing has helped me pinpoint what was missing for me in this highly successful sequel.

In keeping with the same writer/director/stars, we know what to expect going in, and the ensuing bloodbaths do not disappoint.  In this sequel, Wick (Keanu Reeves) is called out on a marker he provided to an Italian mobster years ago.  The mobster wants his sister dead, and Wick is the man for the job—Wick doesn’t want it, of course, but he gets sucked right back into the role of assassin easily enough.  This time, he’s headed to Rome, providing an even grander locale than the New York warehouses which dominated the first film.  The set pieces are even more magnificent than the first, if not almost over-the-top.  If any movie was going to ever be accused of having sets and scenery which over-acted, this would be it.  From the giant warehouse car chase that opens the film, to the best use of a House of Mirrors in the finale, these are places you will remember.  But that’s not what was bugging me about this film… 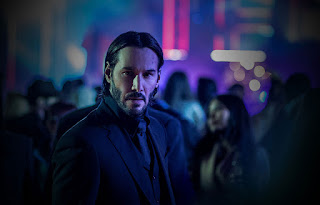 Reeves’ portrayal of Wick in the sequel is one rife with the violent side of the first, but we see more uncertainty and hesitation in his eyes this time.  This makes him a bit more human, more relatable, but at the same time almost takes away from the “Boogeyman” reputation which precedes him.  Originally, he was a badass with a heart, and here, he sometimes more closely resembles a badass deer caught in the headlights.  But put him in a fight scene, and he’s back to being The Boogeyman we all love.  Again—not my biggest issue with the film. 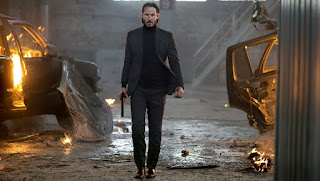 Writer Derek Kolstad and stuntman-turned-director Chad Stahelski are back and in control, meaning you get the same visual style as the first film, and bigger (see: longer) action scenes that try to up the ante on the violent world they initially created.  They also delve much deeper into the mythos of that world.  Whereas the beauty of the original film was that it wasn’t complicated, this time around there’s a bit more to it, and a whole lot more to explain about The Continental, the grand hotel that acts as a non-violent hostel for the gold-paying, killer guests.  Still not my biggest issue. 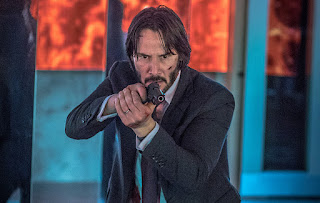 The problem, I finally noticed, is the lack of humor.  In the first film, there were great physical and verbal moments that were just damn funny.  Not so much in the second installment.  There is a brooding tone to this film that is set early on, and it never really lets up.  There are a few “interesting” moments, but none of the laugh-out-loud gallows humor which underplayed the first.  A shame, because this had an opportunity to be even better than the first.

This is a must on Blu-ray; between the action and the gunshots and all of the heavy breathing, if you want the full experience, catch it in the digital format.  The special features highlight how much training the cast went through in order to perform the majority of their own stunts, and seeing Ruby Rose as henchwoman “Ares” getting into the physical aspect (and not in the “Orange is the New Black” kind of way) of the role just enhances her non-verbal performance.

While it may not be as smooth of an experience as the first, it is still worth your time.  And it’s John Freaking Wick, fer cryin’ out loud—pay your respects to the King of the Double Tap.
Grade: B
Special Features: A
Blu-ray Necessary: Absolutely

The 'Not-So-Critical' Critic: THE MUMMY

The Quick of It -
There is a new ‘Universe’ in town… the Dark Universe.  “What?” you may ask.  Yeah, Universal Pictures has launched a monster universe, exploring the classics.  For me, this could go either way.  I am a huge fan of good horror and monster films.  I spent many Saturday afternoons watching ‘Creature Feature’ with Dr. Paul Bearer.  (I still have an autographed picture of him somewhere.)  THE MUMMY will either help to add this universe to my “Look Forward To” list or make me sad to put another extended project to bed… or grave, if you may. 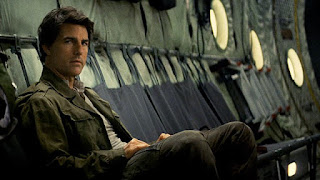 THE MUMMY is our first opportunity to explore this new line of cinematic reboots.  The early reports before release brought some potentially disappointing news, that the project was passed around like a cheap… well, you know.  And then, Tom Cruise had free rein to make some of the bigger decisions.  Based on this revelation, the studio seems to be grasping at straws, hoping to find some ‘universal’ traction.

To speed this along, I walked out having to agree with everyone else who called it a garbled mess.  In truth, even with my often lenient criticisms, they were completely right.  The story was very disjointed.  But I also saw two or three styles reflected in the whole that each could have been a recipe for a good flick.  It felt like a mix of an old-school horror jumper, an action film similar to LEAGUE OF EXTRORDIANARY GENTLEMEN, and a continuous ode to the core monster films.  This includes Brendan Fraser’s THE MUMMY, which made me happy.  Director Alex Kurtzman, is a longtime producer and writer.  So, shame on him for allowing this to happen.  Should have just ran with one style and have completed a much more cohesive project. 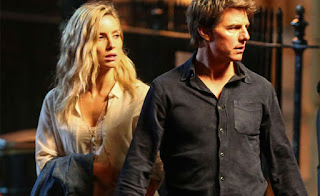 The lady leads give you okay performances.  Annabelle Wallis (of ANNABELLE AND KING ARTHUR: LEGEND OF THE SWORD) as the Mummy, is visually perfect but you never connect enough to care… and they tried to get you there.  Sofia Boutella (of STAR TREK BEYOND, KINGSMAN: THE SECRET SERVICE, and the coming ATOMIC BLONDE) tries to be a hard-nosed archaeologist but did not pull it off.  It felt like a lot of hot air and a pushy stereotype, failing keep pace with the more successful female empowerment roles these days.

Thanks to all the hands in the pot, we get a Frankenstein movie.  Sorry Cruise, you are not a Denzel Washington.  You do not have the true work ethic or vision he does.  So Cruise, why would you think it was a good idea to provide input on something that was not originally yours?  You should know your limitations.

So, why go see it?  Because, the lack of continuity actually gives you something you never expect.  All promises are broken to the audience.  No true thread to follow to know the direction or how this story concludes.  That, in some twisted way, is the inadvertent genius of the film.  The special effects are impressive, the sets are striking, and the finale is nothing you anticipate.

Grade: C
Posted by Tacitus Publishing at 8:00 AM No comments:

‘Blu-ray or Bust’ - BEAUTY AND THE BEAST 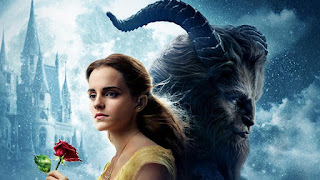 A few years ago, the thought of a studio remaking one of their own classics elicited eye rolls and comments about how there is nothing original being produced in Hollywood anymore.

Enter Jon Favreau; by turning THE JUNGLE BOOK into a live-action film, he created a classic on top of a classic.  Even though the film was heavy on CGI, Disney put all of their creativity, money, and faith into the project, and, along with perfect casting, created another version of the same film that worked so well that it stopped my eye rolling as effectively as a slap upside my fat head. 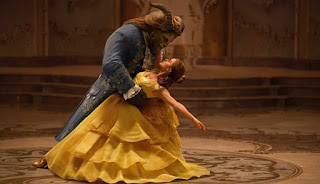 But then came the news that they were remaking BEAUTY AND THE BEAST, and my eyes reverted to my teenage years again (you know, rolling all over the place) (and looking for hot babes).  The casting of Emma Watson sounded like an interesting choice—okay, if I’m being honest, she was the only reason I felt any interest at all in seeing the film. Her beauty and grace onscreen has set my heart to swooning on several occasions (if you haven’t seen her perfect performance in PERKS OF BEING A WALLFLOWER, get off your toilet and go watch it RIGHT NOW).

What makes this movie an entity unto itself is the fact that, even after watching the original again, the vision here is so fresh and visceral that you can’t even compare it to the source material.  You probably already know the story, so I won’t bore you with the particulars of the plot.  What sold me, however, were my two favorite musical numbers from the first being outdone with this outing.

“Gaston” is even more rousing and funny this time around, mostly due to the performances of Luke Evans (THE FATE OF THE FURIOUS) as “Gaston”, and the hilarious Josh Gad (“Olaf” of FROZEN fame) as “LeFou”.  Their chemistry and timing are perfect; Evans captures the suave cockiness of the character, while Gad swoons and cheerleads like no other supporting character has before.  And “Be Our Guest” becomes an even grander and more glorious stage production than it was the first time around.  Once again: perfect casting.  With Ewan McGregor leading the charge as “Lumiere”, the number is more humorous, and soars to new heights—yes, with plenty of CGI, but the quality of the animation is just as convincing here as it was in JUNGLE BOOK. 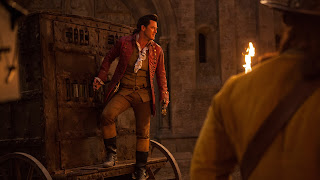 There are a few new musical numbers, but the most striking (and not in a good way) is a song for The Beast.  While I like Dan Steven’s performance of the cursed prince, his singing voice just doesn’t match up to everyone else in the film, and that particular scene falls a bit flat.

Director Bill Condon (DREAMGIRLS, MR. HOLMES) does one hell of a job with his cast, and with a story that, while it has been done before, hasn’t been done quite like this.  This is a must on Blu-ray; your speakers will thank you for it, as will your flat-screen TV.  And, Disney does a nice job with the special features, including a doc concerning the women of the film, behind-the-scenes production work (including those wonderful sets), and The World’s Most Entertaining Table Read. 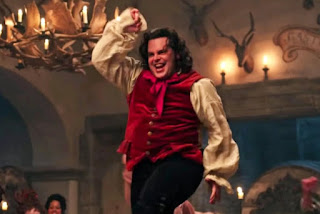 Disney’s next re-imagining—because these have become more than your typical remakes—will be PETER PAN.  Considering that this is a property that has failed other production companies in the last few decades, I’m surprised that they are going in this direction.  But with the successes of JUNGLE and BEAUTY, who the hell am I to judge?  I just hope they stick to the current formula they are using, because it is we the audience who win in the end.  (Okay, Disney ultimately wins, because we are handing over our money, but you get the point.)

Grade: A- (and only because of that one particular BEASTLY number)
Special Features: A
Blu-ray Necessary: Most Definitely