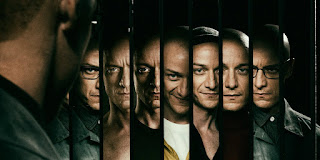 His first three efforts (THE SIXTH SENSE, UNBREAKABLE, and SIGNS) were excellent films reminiscent of Hitchcock and a time when you could tell a smart, surprising, and intelligent story without getting wrapped up in the typical foibles of Hollywood. Then he hit a period of mediocrity which seemed to finish him; he disappeared from the limelight, producing films and television shows, apparently choosing to not write or direct for a spell. 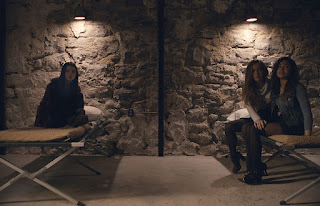 SPLIT is reminiscent of the Shyamalan of old. The film itself is like a love letter to Hitchcock in his use of a small yet effective cast, and the minimal sets (at times, it is reminiscent of ROPE in the way he makes you familiar with the details of the surroundings, even though he uses a few more sets here than Hitchcock did in his 1948 classic) which make up the majority of the film. He also keeps to his idea that the violence you experience off-screen is more dramatic than it ever could be if he showed you every gritty detail. I enjoy gore just as much as the next horror fan, but one of my favorite scenes out of any of his films came in UNBREAKABLE, when he literally turns the camera away from the violence and utilizes sound to illustrate the brutality of a situation.

Casting James McAvoy as “Barry”, a man with twenty-four different personalities, is a stroke of genius. His performance is detailed, subtle when it needs to be, and scary when you least expect it. The rest of the cast is good, but it is McAvoy whom carries this film on his lunatic shoulders. He brings the tension and dramatic drive into every room he enters. Of course, it is a performance that will go unnoticed by the Academy come next year’s Oscars, but rest assured—he has automatic job security (as if he even needed it—he does a kick ass Charles Xavier, you know) with his job here. 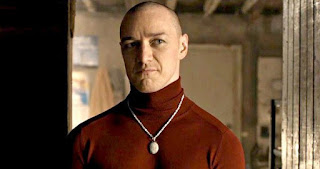 The visual story you are watching might not have turned out the same way with a different cinematographer. Mike Gioulakis, whose magnificent eyeballs added so much sinister effect to IT FOLLOWS, does a masterful job in the confined spaces of the dungeon Barry & Company keep the captured girls in (to be sacrificed to “The Beast”, the twenty-fourth and most abominable of his personalities). There are some shots captured here that will stay with you long after the film has ended—this is the mark of not only a good story, but also of a cinematographer capable of interpreting the creepy confines of the writer/director’s brain.

Of course you know there is going to be a classic Shyamalan twist. You may think you have it figured out. But you don’t. Trust me on this; I had the twist in SENSE figured out about halfway through, and this one hit me like a ton of bricks at the reveal. Regular readers know I don’t do spoilers, and I’m not going to start now. But HOLY CRAP, it’s AWESOME. 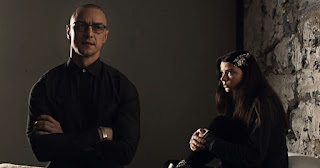 The special features on this presentation include several deleted scenes, each with a not-terribly-necessary intro by Shyamalan himself. While it is interesting to see the director involved in every aspect of the film, it is not entirely necessary to know why each scene was cut. The deleted scenes run longer than the docs, which are all informative, albeit a tad bit short.

It is good to see Shyamalan getting back to his roots. The tale he tells with SPLIT is a confident return to the gritty eloquence he perfected so long ago. Glad you got your swagger back, dude.

Grade: A
Special Features: B-
Blu-ray Necessary: Most Definitely
- T.S. Kummelman
Posted by Tacitus Publishing at 8:00 AM No comments:

The 'Not-So-Critical' Critic: THE BOTTOM OF THE BARREL WITH SEAGAL


The 'Not-So-Critical' Critic:
on THE BOTTOM OF THE BARREL WITH SEAGAL

Where to start?  What a doozy.  Stumbled on this gem in the newly listed queue of Netflix.  Everything about it demonstrated one of the worst Hollywood career slumps ever, one that refuses to go quietly into the night. 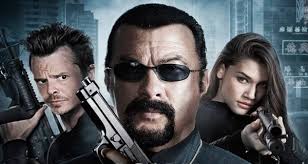 I want to get this portion out of the way quickly… so more time for Seagal.  Director Daniel Zirilli was an ‘unknown’ to me.  His career in the industry may have proved him to be the King of Mediocrity.  So, I guess I cannot blame him for this hot mess; he’s been consistent in his delivery.  But, I cannot forgive one particular person, a Mr. Tom Sizemore (yeah, you read that right), for writing this turd.  Please, either take a writing class or give up everything writing… to include grocery lists.

Now, for some lovely catches I collected while watching the film.  There were many, so much fun.

At the start, it opened with the female lead, Avalon, making this sound like some modern fable of love… and the ‘monster’, a ruthless crime lord… Seagal.  I stressed the insertion of ‘monster’ as it was tough to keep that moniker as the film progressed.  You will see.

Shortly in, we get an action scene with Seagal knife dueling another local crime lord, as Seagal was beginning his takeover of the area.  Seagal was super polite to this gentleman before he felt no resolution could be found, then all hell broke loose...  So, what do you do?  You spend about five minutes swinging a large knife like a maniacal cheerleader, with your off-hand flipping around in unison, right in front of the cameraman.  When you see the two together in the shot, they are standing more than arm’s length away, so I don’t know who was thinking they were going to cut.  Then, with that killing blow, a serious face of finality for Seagal, he draws back the knife… no blood.  This is rated R, right?

Then, later at his crime lord lair (Legion of Doom theme intro), he told his lieutenants, “Violence is a last resort.”  The only thing violent so far had been his bad hair plug job across his forehead.  He looked like an abused baby doll.  While watching the scene, all I could think of was the South Park impersonation.  A rather large man all in black making awkward statements.  Spot on.  Unfortunately, he has stayed that way for too long in these later years, fat and in black.  I have plenty of pudge, so I can make fun.

Then, we finally got our main introduction of our hero, Jack… who was a bank robber.  He and his buddy, Sam, robbed a bank in Thailand then rush over the border into Cambodia.  Their escape was made by really nice motorbikes.  Not like they would stand out...  You have to understand, the road systems in those countries are limited.  How was it that no one saw where they headed, if nothing else.  Oh, and the descriptions given for the film claimed that Sam was an American expatriate.  His strong British accent says otherwise.

Then, the two lovers of our story get to share screen time… in a slowmo / love music kinda way.  Oh, so horrible.  She sounds like a SoCal half the time.  He showed her his cut of the robbery, and followed one of the great lines of the film –

Afterward, a bad guy lieutenant of Seagal’s finally located and confronted Jack, forcing Jack to continue robbing so he can get a cut.  When first introducing himself… he did so with his full name.  Full name.  Why not give other personal info so we can be clear as to who his identity?

The film was filled with narration to help move this crud along, including a great 80’s music montage to show more robberies taking place.  My notes go on… and on…  So to follow suit, I’m going to bullet-montage some the highlights.

-Jack says Sam’s name during a robbery.
-Jack could have just taken with his love.  This is Southeast Asia.  He had no ties to people or a job.  Easy to disappear.
-Goes to buy guns from a man named Greedy…  Greedy should have just shot Jack and kept the money.  No one would ask questions why there was a white guy dead in a ditch.
-More montages…
-Apparently, Jack never explained to Sam who this bad guy was, the one who has been feeding them the banks to hit and when.  And, Sam never questions this… not until after two montages.
-A parkour baddy chasing them down while they are on their bikes after a robbery, only to die getting shot.
-Our lady-of-love suddenly reveals near the end she knows how to use a gun.  Why?  Cause the story needed her to.  Her reason, “With a body like this, you better believe I can protect myself.”

One of the best moments was when Seagal was mid-conversation at the start of the scene.  A goon was to interrupt him during polite lunch conversation, and we hear about fish and how some people see them as sentient creatures… and those people would have a problem eating them.  A true dilemma… and a well-chosen topic while having lunch with your ‘local lady’ (probably a retained hooker, but he is saving her from a desperate life on the streets, and for a great boob job display).

Then, as Seagal was realizing he has someone on the inside feeding the robbers the banks to hit and when, he laid on a true piece of art –

“I’m going to have to wait to do what I do, just a little bit longer.  Because, I want to be sure I don’t kill anybody innocent.”

Best line:
The proudest moment was when Seagal told one of his lieutenants to “be careful” after instructing him to kill the mole.  Really.  “Be careful.”  This wasn’t an inadvertent way to end the conversation.  With full pause and looking the guy in the eye, he said this.

Best special effects:
A chase scene, where the good guys needed to get away from the bad guys.  Jack shot some gasoline 50-gallon drums that happened to be stacked by a telephone pole next to the road.  The pole falling, so awesome.  My son at 8-years-old could have done this animation on his computer.

In summation, compassion would have been to not let this film be made.  Sure, there may be a market for this material, but no.  Just, no.  Maybe his friend President Putin of Russia was behind the release.
Posted by Tacitus Publishing at 8:00 AM No comments: