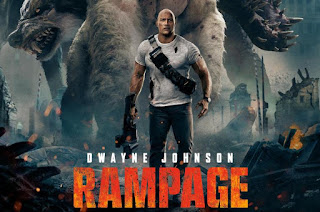 There is a darn good reason that Dwayne “The Rock” Johnson is everywhere nowadays.

The man has gone from being a versatile entertainer to a rather versatile actor.  Sure, the majority of his films are action pieces, but his clear sense of humor and playfulness come out in everything he does.  He is a charming badass, and this persona has carried him far.

So, I can forgive him if he stumbles upon a slight detour every now and again.  Take RAMPAGE, for instance.  Based on the old Konami arcade game, the film is about giant animals that (you guessed it!) go on a rampage through Chicago.  Mr. Johnson’s timing and comedic skills are quite evident, as is his physical onscreen presence.  But he gets a bit lost amidst all the chaos, and that is truly when this film suffers the most.  You see, there isn’t much to set this apart from other “monsters loose in a big city” fare, besides that the majority of those movies do it better.

There is too much rehashed dialogue here, and too many one-note characters.  Like the evil corporate bad guys, a brother and sister team.  Played by actors Malin Akerman (WATCHMEN) and Jake Lacy (MISS SLOAN), these two are the most badly written baddies to date.  It isn’t their acting, but rather the fact that there are no layers to these people at all.  They are here for one singular purpose: one is smart, the other is stupid, and together they are an absurd corporate pairing of incompetent greed.

Mr. Johnson does his best—again, many of the films jokes land solidly because of his delivery, and his interaction with George the giant ape are believably honest.  Yet there is only so much his bravado can do, and sadly, it isn’t enough to save this ludicrous mess. 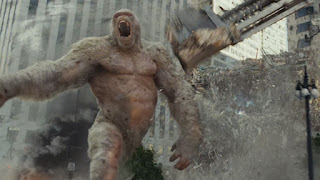 The shining star here, however, isn’t Mr. Johnson, or the giant CGI beasties.  That honor belongs to the great Jeffrey Dean Morgan (WATCHMEN, “Supernatural”), who has been chewing scenery long before he was swinging that bat on “The Walking Dead”.  His portrayal of government agent Harvey Russell is done so with tongue planted firmly in cheek.  He gets the joke, and he’ll share it with you as much as he can.  He hasn’t looked this relaxed since his work as The Comedian in WATCHMEN, and it is a relief whenever he enters a scene.  But even he cannot escape the bad dialogue, or the predictable elements, which litter this production.

The special features are blasé, at best.  There are several behind-the-scenes docs, including one about the actors performing their own stunts.  Skip the one about the motion capture performances; any that you’ve seen before with Andy Serkis at the helm are a lot more fun and informative to watch.  Hell, even the Gag Reel kinda sucks.

Up next for Mr. Johnson are four films in various stages of pre-production, and four others that have been announced.  His, kiddies, is a busy schedule.  Let’s just hope that out of the three upcoming sequels planned for him, they stay away from this stinker.  Can’t say I’d easily forgive a second trot down this particular dirt road.

Grade: C-
Special Features: C
Blu-Ray Necessary: Only if you have kids—that would easily explain it being in your movie collection if someone else notices that you have it… 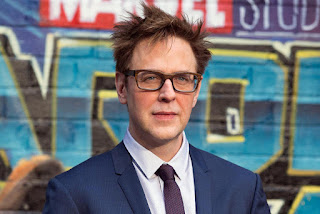 I wonder about the sanity of your board at times.  I mean, you’ve made some pretty silly (and I use that word quite loosely) decisions in your time, but firing James Gunn over tweets he made several years ago?  And even better, some of those tweets were made when he was already employed by you.

Speaking of silly decisions, by the way, thanks for JOHN CARTER.  Boy, was that a stupid one!  Honestly, when they say that a film is before its time, that isn’t complimentary when the indication is that the film was made before the special effects had yet been perfected to make the ideas look believable.  That movie looked like a giant grass stain on an ugly K-Mart rug!

But I digress; we were talking about James Gunn’s firing.  Which, you should understand, could be considered The Most Asinine Decision yet.  Not only were his tweets about rape and pedophilia (which were somewhat offensive, I’ll admit) made over seven years ago, but he also apologized for them.  SEVEN YEARS AGO.  You reacting to them now is the absolute worst case of a knee-jerk reaction in the history of mankind.  It’s like if a mechanic crushed his fingers while pulling out an engine and then, SEVEN YEARS LATER and totally out of the blue, screams out “oh Sweet Baby Hey-Zeus, that FREAKING HURTS!”.

Why that knee-jerk reaction?  Because some idiot that likes to break things dug them up and decided to say “no more”.  As in, “no more shall I stand by and allow things said nearly a decade ago go forgotten”.  Because hey, sometimes an a-hole finds his niche, and he’s got to stand by it.  I get it.  The dude (whom, you will notice, goes unmentioned here because there is no way in hell I am giving him any more publicity) (even though only thirteen people read my drivel on a regular basis…) needs attention.  Most bullies do.  Which, essentially, is what this boils down to: online bullying.  Only this guy takes it one step further and uses people’s own words and lives against them.  Yes, Mr. Gunn said those things.  Yes, some of them were over the line as far as humor and offensiveness goes.

But that didn’t stop you from hiring Eddie Murphy, did it?  The same controversial comedian that joked about women having gay friends and “bringing the AIDs home on their lips”, and imitated famous Hollywood stars having gay sex.  Don’t get me wrong—I wasn’t offended by any of Mr. Murphy’s jokes.  Those examples are from his HBO special “Delirious”, and I encourage everyone to watch it, as it still stands as one of the greatest stand-up specials of all time.  My point is that you took a man that was sparking controversy on stage and hired him to star in a whole slew of films—in case you forgot, he was THE NUTTY PROFESSOR, DOCTOR DOLITTLE, and the voice of “Donkey” in SHREK.  Great casting, by the way, and I say that with the utmost sincerity.

Oh, but wait—it gets even better!  I need to remind you of someone, and let me know if this strikes a chord or not.  You remember Victor Salva?  The director that was convicted of molesting the twelve-year-old star of his film CLOWNHOUSE in 1988?  Who also, when he was arrested, had actual videotapes and magazines clearly depicting child pornography in his possession?  Yeah, that a-hole.  You hired him in 1995 to direct POWDER.  Wow, look at that—you hired him seven years after he was convicted of pedophilia.

And you fired James Gunn for joking about pedophilia seven years ago.

Contradict much?  Hold on, let’s look at your actual statement regarding the firing: “The offensive attitudes and statements discovered on James’ Twitter feed are indefensible and inconsistent with our studio’s values, and we have severed our business relationship with him.”   That’s your own Disney chairman Alan Horn, who you hired in 2013.  He used to produce TV shows that, for their day, handled controversial topics like bigotry, interracial relationships, and child abuse in ways that were topical and dramatically effective.  “All in the Family”, “Good Times”, “The Jeffersons”—all good shows.  Not really anything wrong there, other than the fact that Mr. Horn states that Mr. Gunn’s tweets (from SEVEN YEARS AGO) are inconsistent with the studio’s values.

The same values which led them to distribute a film about a teenage boy, directed by a convicted child molester.

Re-hire James Gunn.  Again, I’m not defending his tweets.  But the auteur has made you a ton of cash, and he has apologized more than once for the things he said nearly ten years ago.  He admitted they were, perhaps, not so politically correct.   But he also stated that while making the films he has for your studio, he has become a better person.  It shows in his films.

Get your shit together, Disney.

The Quick of It -
Reviewing movies can have some benefits.  It lets you risk choosing those questionable films… hoping for some possible renewed life in a tired genre.  Like, say… Comedy.

Slap me in the balls!  This was not a refreshing, ice-chilled drink-of-a-film, refreshing to the comedic palate.  I could only have wished to choke on the ice cubes to end the dull pain from the brain freeze. 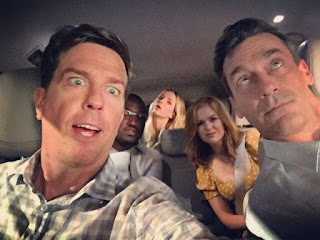 Based slightly on a group of friend’s tag game, one that has lasted years, TAG does nothing beyond what you would expect.  In fact, you will find all the horrible cliched roles spouting drab lines.  As it goes, the story centers around five friends who took the game of tag too serious.  Every May, for the full month, the last tagged friend will hunt down one of the others, using elaborate ruses to get close for the tag, then they join forces to continue on to the next.  What makes this year’s month of tag different is that Jerry (Jeremy Renner), the only one of the crew to have never been tagged, is getting married and says this is his last year.

Starring a strong cast, Ed Helms (Hogan) and Isla Fisher (Anna) lead the charge as a committed couple.  ‘Committed’ being the key term.  They seemed to have the most fun.  Then along the way, you get Jon Hamm (Bob), Lil Rel Howery (Reggie), and Jake Johnson (‘Chilli’).  They are shadowed by a journalist for the Wall Street Journal, Rebecca, played by Annabelle Wallis (THE MUMMY, ANNABELLE).   It was this original article the movie is based on.

To break it down to its simplest parts: 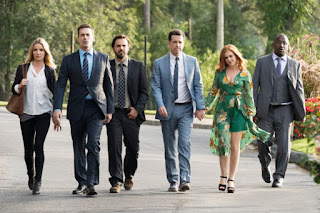 Ed – the quirky friend needing redemption.
Jon – the playboy friend.
Lil Rel – yes, the ‘token’ black friend – typing this makes me shake my head in this age of cinema.
Jake – the stoner friend.
Annabelle – the naive on-looker to tell the story through. 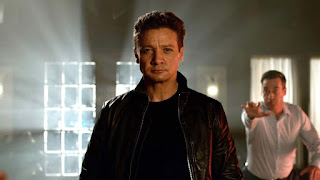 The collection of scenes and one-liners was forced, leaving you wondering about the lost opportunities.  Director Jeff Tomsic (nothing stands out as notable to distinguish his career) should have smelled something flat and unappealing with this script.  Yes, the camaraderie could have been genuine if the actors cared in the slightest.  I felt no sense of real friendship, just mucked-up moments put together to fill the time.

Skip this one… as I know you probably already had.  I’m sure you didn’t need these words to verify what you already knew.  Only spoiled, lumpy milk here.

Posted by Tacitus Publishing at 8:00 AM No comments: