The Quick of It -
Well, my brain hurts.  Writing these types of reviews grows tiring.  I’m not saying this is a ‘must skip’ film or you have drop everything to bask in its glory.  Just that there are no surprises and you get what you expect.  If nothing else, at least it delivers.

PACIFIC RIM was a money grab-bag.  I can comfortably say its sequel won’t be so fruitful.  When I sit down for a 3D viewing just after work and there is no one else, the promise of matching the budget makes me quite skeptical.  I do feel bad about it.

Director Steven S. DeKnight, coming from the producer side (‘Daredevil’, ‘Spartacus: War of the Damned’, ‘Angel’, and ‘Smallville’), did not fail in the way that you think.  The effects are on par, if not groundbreaking to some degree, with what is currently the ‘bar’.  You can safely watch knowing there is no “Baying” going on here, the action sequences aren’t spinning, undecipherable steel.  The settings are varied enough that you kinda get the feeling that they put a Mech in any situation they thought would be awesome.  They were not wrong.  The ice fight is quite… chilling.  The pacing and the script was not a huge anchor to being a successful project down.  DeKnight is not at fault, sorta. 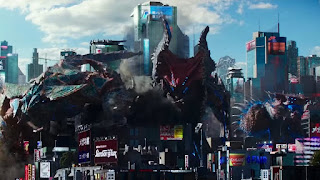 So, why am I having issues?  It’s that you get what you expect!  Thought I said that…

This movie is a fun film.  It’s also so bland on the surface, you are only left slightly satisfied when you walk out.  The acting is good enough.  You get John Boyega and Scott Eastwood (yes, his son), so you know they delivered the lines that hold just enough conviction to help you stay in the film.  Beyond that, it is what it is.

Grade: B
Posted by Tacitus Publishing at 8:00 AM No comments:

‘Blu-ray or Bust’ - JUMANJI: WELCOME TO THE JUNGLE 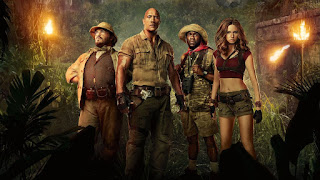 Occasionally, the wunderkinds of Hollywood can take a great thing and turn it into poo.  You can have a great concept and screw it up with a horrid cast.  Or, a horrible script and a great cast.

And then sometimes, that fabled Hollywood machine actually knocks one out of the park: great script, great cast—those films usually make a ton of money, and many are lauded with awards.  The long overdue sequel to 1995’s JUMANJI is one such indomitable beast; from concept to casting, the only thing one could possibly complain about is that it is better than the original. 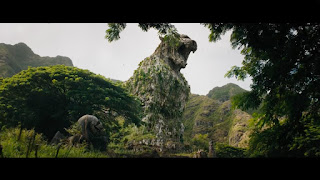 Yeah, I know—if Robin Williams was still alive, he would probably hunt me down for that one.  But what director Jake Kasdan (son of the infamous Lawrence Kasdan—director of THE BIG CHILL, writer of RAIDERS OF THE LOST ARK and several STAR WARS films—who cut his teeth on “Freaks and Geeks”) accomplished is something that should not be ignored.  He has pulled a complete James Cameron—hell, he pulled a freaking Lawrence Kasdan here, kids!  His father’s first claim to fame was writing THE EMPIRE STRIKES BACK, one of the greatest sequels in movie history in that it surpassed the first film by delivering a complete change of pace.  Whereas A NEW HOPE was essentially a story about the good guys winning, EMPIRE was all about the bad guys winning the day by beating the tar out of the Rebellion.  So it is with JUNGLE; the first film did not utilize Williams’ comedic skills enough, which lent a serious overtone to the proceedings.  JUMANJI seemed tonally overbearing at times, not to mention the fact that the special effects weren’t ready for such a large endeavor.

This time around, the casting is spot on.  Four teenagers serving detention happen across a video game titled (you guessed it) “Jumanji”, and are transported into the game itself.  Only, they have become the characters in the game, to great comedic effect.  The kids represent your basic cliques from high school, only the game crank things up a notch: the nerdy kid becomes a muscle-bound hero (played by Dwayne “Still The Rock” Johnson), the football jock gets turned into a mousy sidekick (Kevin Hart), the female wallflower becomes a Lara Croft type heroine (Karen Gillan, also known as “Nebula” to all of you GUARDIANS OF THE GALAXY fans), and the pretty preppy girl turns into…well, Jack Black.  It isn’t just the reversal of stereotypes that makes the film work, but also what the lead actors do with their parts.  Each encompasses their avatars with the trepidation and fears of teenagers, perfectly capturing their mannerisms and attitudes.  And the cast plays well off of each other; this is not the first time Johnson and Hart have appeared in a film together, but it is the best.  And Black seems to be having a ball playing a teenage girl trapped in a man’s body; his delivery never wavers, and while there are several laugh-out-loud moments in the film, ‘The Pee Scene’ nearly had me in tears. 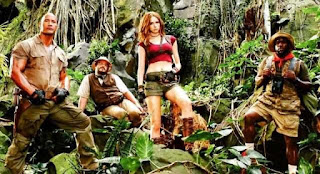 The cinematography by Gyula Pados is magnificent; he captures the rolling plains and mountainous regions of Hawaii with a dramatic flair, most notably whenever the villain (played by Bobby Cannavale) is onscreen.  His use of shadows and color adds greatly to the storytelling element, and the matching score by Henry Jackman makes it even better.  Even behind the scenes, Kasdan has assembled a group of all-stars!

The special features are a must, except for the music video (not Guns N’ Roses, FYI).  The best is the making-of featurette, although the original is mentioned throughout many of the documentaries.  The filmmakers bravely tackle the No Robin Williams topic, and do so with grace and humility. 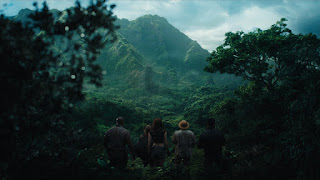 My only real complaint is how quickly the studio is ready to make a follow up; the four leads will be back for what is being billed as JUMANJI 2, although I’m sure the casting—and the cliques—of the kids will be different.  As it took twenty-two years for this sequel to come to fruition, it looks like we should see another entry in the next year or two.  I just hope it doesn’t diminish what the cast and crew pulled off this time around—a film better than its predecessor, and something that should not be overlooked.

Grade: A
Special Features: A
Blu-ray Necessary: Most definitely 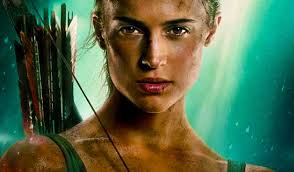 Reboots—ahh, how Hollywood loves their reboots!

Sometimes, those reboots work amazingly well—monetarily speaking, of course.  Take an idea or a previous film that you think would function much better with some newer technology and a hip cast (yeah, I used the word “hip”—watch yourself, or I’ll use “groovy” and “bitchin’”, too).  Reboots can mean easy money for a studio, and usually are easy tent-pole films, many of which are released during the summer.

Now, keep in mind, a “reboot” is not necessarily a “remake”, and it isn’t necessarily a “sequel”.  Take the multiple iterations of the STAR TREK films; recently, what J.J. Abrams did was reboot the series—new actors, new effects, almost new stories, and it all equaled box office $$.  So much so that the upcoming fourth installment will be directed by Quentin Tarantino.  The PLANET OF THE APES films were all remakes—incredibly rendered and beautifully told remakes. 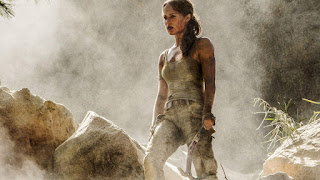 The reboot is a curious endeavor, as it doesn’t necessarily ignore what came before it, but it may not address it, either.  Take TOMB RAIDER, for instance.  Fanboys around the world got instant chubbies when it was first announced that Angelina Jolie would be suiting up as video game heroine “Lara Croft” in the 2001 film, and for good reason: she had the curves and the presence to match the character.  But the film (and its 2003 sequel) were poorly executed, run-of-the-mill actioners that, while they made money, didn’t live up to the hype. 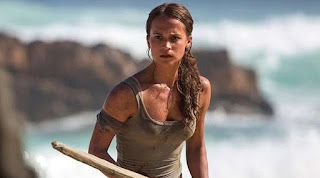 So why wouldn’t the studio want to try a reboot a decade and a half later?  Only this time, the script is better, the effects are better (mostly), and the lead actress is… GROOVY (#sorry/notsorry)  This time around, Alicia Vikander (EX MACHINA, THE DANISH GIRL) fills the title role, and what you get is an action/adventure film that actually feels more human.  Sorry, Angelina, you’ll always be my girl (as soon as you lift the restraining order), but Ms. Vikander does such a convincing job as a young woman forced into a tough situation that you don’t expect her to come out unscathed.  She brings a certain humanity to the role that felt lost in the prior films.  Yes, you know she will come out on top in the end, but you care about her as you watch, you feel for the emotional and physical trauma she experiences along the way.

Yep—still talking about a movie based on a video game!  The story starts with Lara basically getting her butt kicked.  Her situation is this: she works as a bicycle courier and is having a hard time paying for her bills.  Although desperate for cash, she is also having a hard time declaring her father (played by Dominic West) legally dead; the philanthropist has been missing for seven years, and if stubborn Lara would just sign the appropriate paperwork, she’d inherit his vast fortune and estate.  After coming across clues as to his last whereabouts, Lara embarks on a quest to find out what happened to him, and discovers…oh, yeah, that’s right—I don’t do spoilers!

Instead, allow me to wax poetic concerning those action scenes and set pieces.  There are two minor stumbles when it comes to the effects—nothing that distracts from the film too badly, but they are kind of the obvious “ran under budget on THAT scene, didn’t they” thing.  But cinematographer George Richmond (KINGSMAN) manages to switch between capturing a sweeping landscape to close-up hand-to-hand combat effortlessly.  None of the shots seem tiresome or forced, and there is a fluidity to the film which belies its humble beginnings.  Most notable are the bicycle chase (totally rad) and the dilapidated airplane scene (totally bitchin’), two of many white-knuckle moments that are easy studies for inventive filmmaking.  And the attention to detail when it comes to the sets makes you wish the camera would linger just a bit longer, so you can see everything.  It takes true appreciation of the lore behind this film and a careful eye to get that much right, especially when it is in the background.

Besides those couple of missteps with the effects, the only other thing that really bothered me with the film is Walton Goggins (THE HATEFUL EIGHT, AMERICAN ULTRA) as baddie Mathias Vogel.  As versatile and introspective of an actor he is, he never really defines the level of evil and/or crazy his villain is.  He comes across more as a nasty foreman or a slightly homicidal bully than he does your typical straight-up bad guy.  On another day, he could have just been a regular guy, doing a job.

It is still a bit early for Warner Bros. to announce a sequel, but I think it is safe to say that this reboot should line their pockets enough to warrant a follow up.  There is more to this character we should see, which is the lovely thing about this film: she is a fully realized person, thanks to Ms. Vikander’s performance, and not just a pretty prop piece hired to sell tickets (sorry, Angie—still love ya, babe!).